This series explores the topic of colonialism in Canada’s past and current times. Looking at all aspects from personal to socio-political to industrial development, these pieces try to emphasize the importance of recognizing and dismantling colonial systems still present in our society, and honouring Indigenous rights and sovereignty.  This series consists of different works under this theme, with some collaborations.  They have been included in various exhibitions over the years, separately. More specific artist statements are posted at the bottom of the image collection. 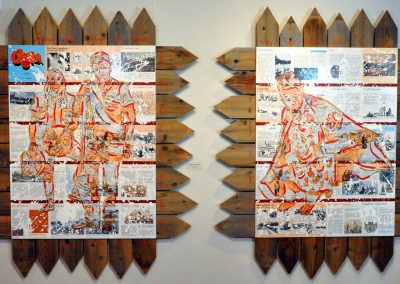 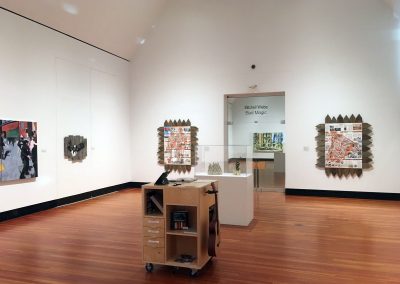 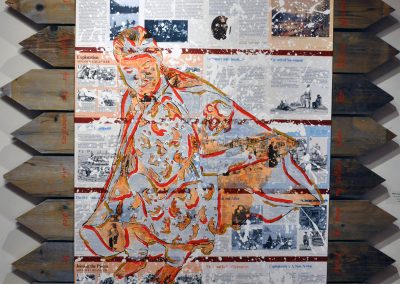 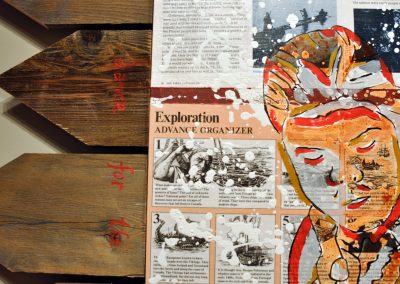 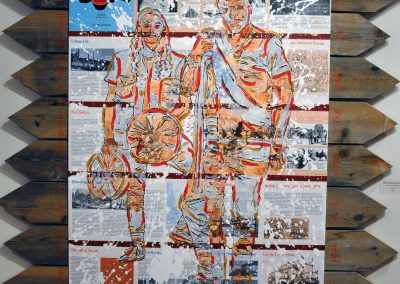 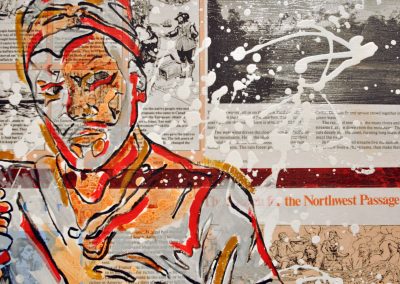 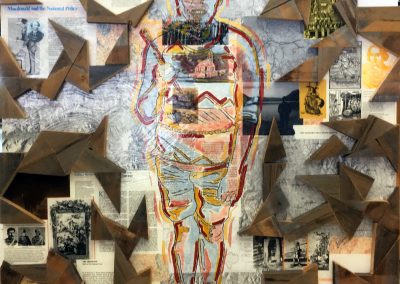 History Lessons (Jordyn) – This Land is Not For Sale 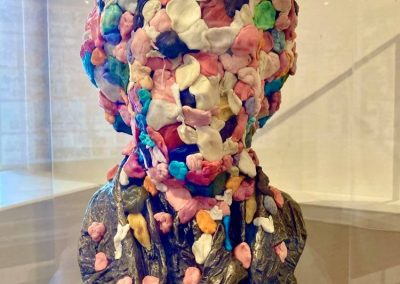 Stick It To The Colonizer 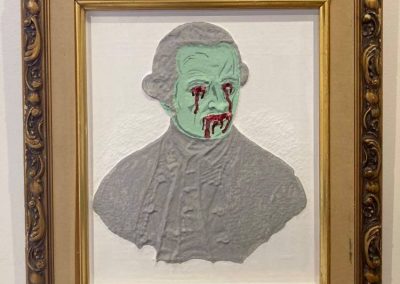 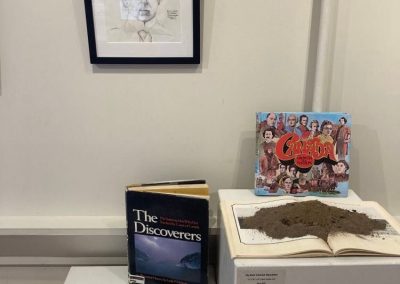 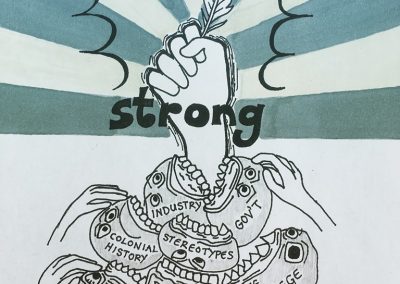 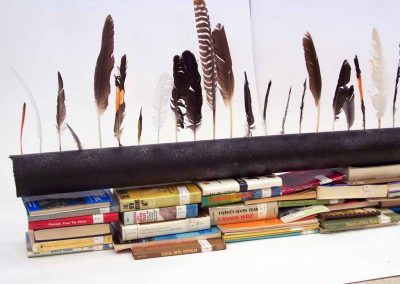 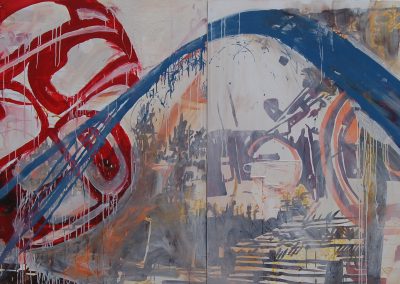 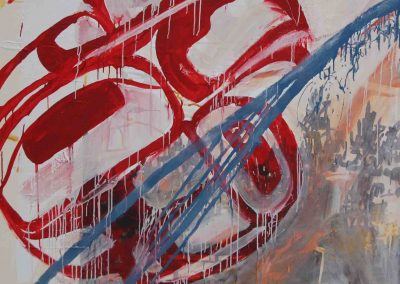 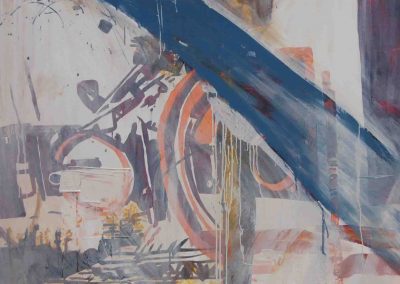 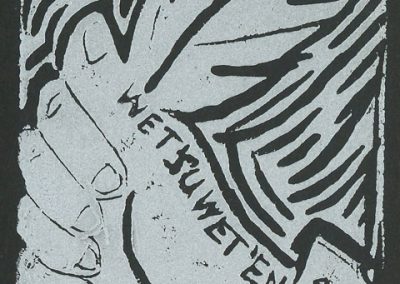 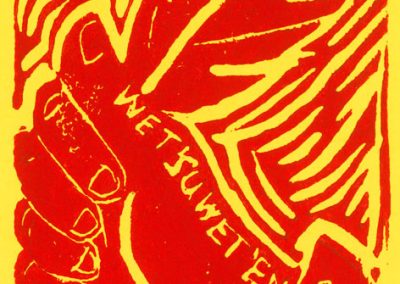 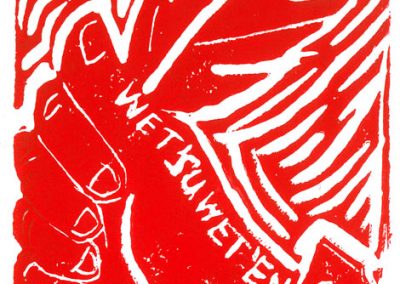 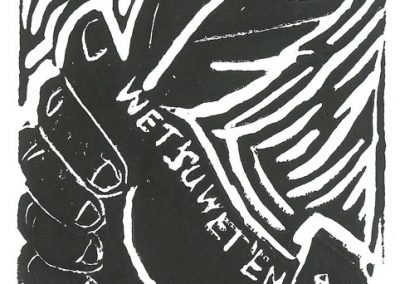 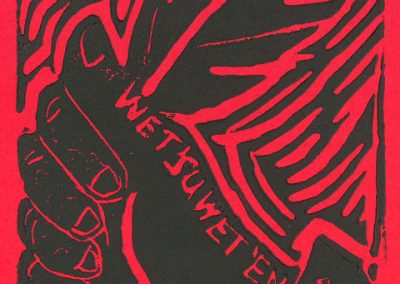 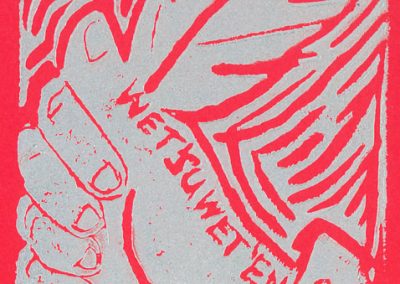 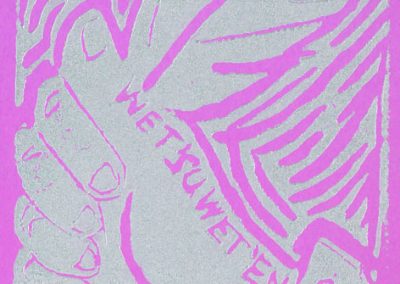 These two selections from Rath’s ongoing portrait project “History Lessons” depict local First Nations members who are active in their community as carriers of culture and indigenous rights.  Both artworks have an underlayer of pages from an old history textbook called “Canada: Growth of a Nation”.  On top of that is splashed a white paint, to symbolize the tendency to whitewash history as focused around the dominant colonial perspective.  The portraits are painted on top of this in a limited palette, utilizing traditional NW Coast art colours of red and black, as well as a translucent iron oxide and blueish-grey to symbolize the earth and atmosphere (the grey being the smoke of fires, smokehouses and ceremony).  Emerging from all sides of the paintings are weathered cedar planks, cut as defensive stakewalls, as would surround forts in the past.  These echo the fur-trading/settler forts and Hudson’s Bay Company posts of the contact era (eg. Fort Fraser, Fort George, etc.).  Affirmative quotes and lyrics encircle these portraits, as if reclaiming the cedar palisade, breaking through the barriers of the fences of the dominant culture.

I dance for the kids behind me,

I dance for the ancestors who died for me,

and I dance to keep my culture alive for the future generations.

Bring that culture back to me

My people fished with torches in the river of mist,

Where the two rivers meet, where heaven exists,

It’s not people who do wrong, it’s that people are passive

This is my prayer song, the Eagle can grasp it

RECLAMATION PIPE:  The bottom of this piece is comprised of a stack of old books on Canadian history, themselves now historical, as they define Canada in terms of a colonial perspective.  Balanced atop these books is a black tube, representing a pipeline, a more modern version of colonialism, since the federal government does not seem to be interested in respecting the laws and rights of our First Nations opposed to the Enbridge Northern Gateway Pipeline Proposal.  However, this pipeline is transformed into a sort of Peace Pipe, as feathers sprout atop the length of it.  This represents the renewal of cultural strength, growing from this colonial past and contemporary challenge.  It overcomes the stated purpose of the pipeline to be reclaimed in the power of the indigenous traditions, founded in the laws of Nature.